In the past few months, I have developed a sudden interest in quotes. I’m not a big fan of novels or poetries, and maybe that’s why I didn’t come across many quotes yet. However, thanks to anime (And the anime related communities), I found out that it’s not necessary to be famous to construct a quote; it’s the meaning of those words that counts.

Let me give an example for you guys then:

“You poop what you eat”

See? As long as the words have a deep meaning, it passes for a quote.

Anyways, today’s post (And the next two posts following this) is focused on the theme of Quotes. Why? Because the lovely blogging friends of mine, Chizurue and Auri, have blessed me with the opportunity to take part in the tag that has been going around for quite a few days now; the 3 Days, 3 Quotes tag!

• Thank the person who nominated you.
• Post a quote for 3 consecutive days (1 quote for each day, can be a super short post).
• Nominate three new bloggers each day.

First of all, thanks to both of you for nominating me in this tag; I was really interested in trying it out! I know I’m nowhere near the level of sophistication in Chizu’s selections or the amount of intellect in Auri’s choices, but still I will try my best! Be sure to check out their posts before mine.

For the first day, I believe we should start with something light hearted and romantic; that’s why today’s quote is from my favorite romantic series Toradora!

“I’m a dragon, you’re a tiger. Since ancient times, the dragon has been the only beast to equal the tiger. Even if you are not by my side right now, I will leap through space and time and will always be by your side. These feelings will never change.

If I remember correctly, these lines were spoken by him at the last episode. The reason why I chose this line is because it’s romantic in a unique way. Well it’s not really that romantic to compare the girl you love with a tiger, but as he continues his words, it starts to make more sense. 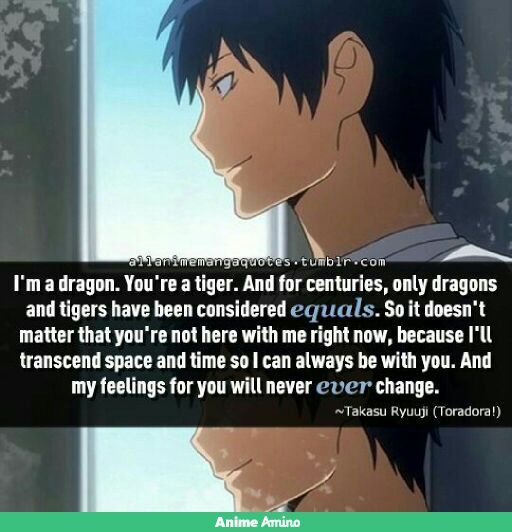 *Spoiler Alert* This quote is really meaningful in the series, where the absence of Taiga makes the scene quite a tearjerker. What makes it even more impactful is that the same thing was said by him at the same place of the school in the second episode, but now, he was standing at there alone, with Taiga not there anymore. However, his positive mindset and belief in the fact that she would come back, proves the worth in his words. That’s the reason why this quote is one of the most famous lines in the anime Romcom genre.

That’s the end of Day 1, I hope you guys enjoyed it just as much as I did! Next day’s quote might just be a bit serious, so look forward to that~

Oh yeah, it’s time for me to play Santa~!