At the start of the Spring 2018 season, I was determined to check out 3 anime which had gained a lot of buzz in the social media right after their release. So far, I have been able to check out two of them, I won’t lie, I’m kinda scared to watch the other one; the reason is mainly because I’m completely disappointed by how these two series turned out to be like. Today, I’ll be talking about ‘Citrus’; yes, that anime which got kinda famous for this particular meme.

I’ll try to hold back on the punches. 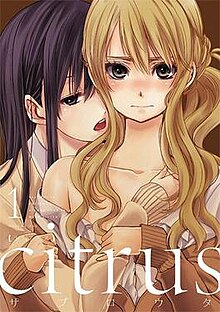 I always wanted to step out of my comfort zone (The SoL and RomCom genre, I mean) and Yuri was one of those few genres which I was eager to know more about; but God, I hope none of them is like Citrus. While watching the first episode, I realized that I’m going through the same thing as I did back in June 2017, while watching ‘Kuzu no Honkai’; it’s the same: A beautifully decorated box filled with loads and loads of crap!

The story is mainly about Yuzu, who started going to an all-girl highschool because of his mother’s remarriage. She has always bragged about having a bf in front of her middle school friends, but sadly it was all a farce, and she had never even fell in love with anyone before! On her first day, she took her time to apply loads of make ups and wear all these accessories to hurry up and make new friends, but sadly, she was stopped at the gate for obstructing the school dress code. Being the loud protagonist, she rebelled against it only to be completely dominated by the school president, Mei. Dejected, when she came back home, she found out that she actually has a step sister, and that’s no one else but Mei herself. What happens next is just a cute tale of two step sisters coping up with the world while slowly opening up to each other emotionally (And physically).

Before I start ranting about the negatives, let’s be gentle and point out some of its positives first!
To start with, the animation and art style are absolutely brilliant! If it had a mediocre art style then I’m pretty sure no one would have even bothered to say anything good about this series. Maybe the creators decided to give their all in the external appearance of the anime, because they were totally aware of the fact that the story is nothing but a harecchi lesbian fu*kfest. Getting back on point, I was really attracted to the appearance and that was the main reason why I decided to check this series out in the first place. I would actually be really happy if all the anime out there would start to move on from the 2012-ish style and focus on adapting this new style of art instead.

The second positive attribute of the series was its excellent use of OSTs. For audiophiles like me, it was a blissful experience. The musical excellence was the main reason why I didn’t drop the series when I realized that it’s not worth it; good music somehow makes me unable to drop a series no matter how bad it is (I regret that habit of mine). Nevertheless, I would recommend you to check out its OSTs if you have a habit of listening to good piano based soundtracks, like I do; they are amazing!

Now then, I guess it’s about time I start showing you the real side of this train wreck.

Can we just start with the fact that the story makes no sense at all? After finishing it, I was completely depressed by the fact that there was zero plot development. Then how did they get past the 12 episode mark, you ask? It’s simple, all they had to do was add in more characters and make a mess out of something which messed up from the beginning! I won’t say anything against the basic story till the 4th-5th episode, where Yuzu found out about Mei’s past. Honestly, I enjoyed the cute little moments and the conflicts between them. HOWEVER, what happened after that was utter disappointment! They added a random character from the past to make things complicated between them, but when that was done and over with and they still had 3-4 more episodes before they could end the series, they decided to add another set of random characters and make things awkward once again for no apparent reason. In the end, I realized that I wasted 5 hours of my life watching a borderline yuri hentai with a shitload of pointless and cringe worthy drama. *Sigh* It was agonizing.

The characters are even worse than the story. First off, Yuzu is the generic blonde and loud girl who is actually a huge pain in the ass (And also ears). I wonder how she even made friends, I would never ever try to get close with someone that stupid and impulsive. Her loudness and crazy behavior was fine at first, but with time, it was over exaggerated; name a Highschool student that would not be suspended if they ever interrupt a school assembly to announce that one of their teacher is a gold digger (But well, we have seen School Presidents throwing condoms at the students, so maybe it’s not that bad). But still, their repeated attempts to make Yuzu’s dramatic speeches meaningful, was just an effort in vain, as 99% of her speeches started off with the phrase, “I would like to apologize about……” (Pain in the ass)

Mei, on the other hand is one of those cold and soft spoken black haired who are portrayed to be suffering from a lot of pressure and lack of love. At first, you might think that she has been tortured a lot in her childhood, which resulted into her transforming into a cold girl who had locked her heart away for everyone else, right? Wrong. Trust me the reason is not worth it at all! In the end she was nothing but a tsundere who isn’t noisy and doesn’t express her emotions openly. Well, she is actually better than Yuzu in some ways.

The other characters are also annoying in one way or the other. Thankfully, we had a savior among them, who somehow made the journey less painful for me, and that girl is no one other than Harumi, Yuzu’s new best friend in the school. She was the most balanced character in the whole series. Harumi kept on supporting Yuzu when she was feeling low and also turned out to be a key character in the later part of the series. I wouldn’t lie, seeing all the girls pounce on each other for no reason, I was waiting for the time when she jumps on Yuzu too (Just like Hanabi and Ecchan in Kuzu no Honkai), but I was relieved to find out that she was indeed the best girl in the whole series. Thank you for the painkillers, Harumi!

Now finally, let’s focus on the third most cringe worthy aspect of the series, Fanservice. Well people have different point of view when it comes to the use of fanservice in anime. To be honest, I’m not a diehard hater of that theme, but I don’t approve of it either; especially when it is used in an already fu*ked up series like this one. The random kisses, the intended wardrobe malfunctions, the boob grab scenes, and many other cringe worthy clichés just somehow turned the series from bad to unbearably agonizing! It would have been completely fine if they just showed a few kisses between Mei and Yuzu, but sadly Mei has kissed practically everyone in the series for absolutely no reason (Well, I change my mind, Mei is equally bad as Yuzu). If you are looking for a yuri fap material then here’s your treasure; just skip over the drama parts, they will turn you off.

So in the end, this series is highly recommended if you are a masochist who likes to torture themselves mentally by watching cringey stories with two sisters who only want to fu*k each other but get constantly disturbed by random background characters who are even introduced in the third last episode just because the creator has no idea wtf they are trying to achieve.
But sadly, I ain’t one of those guys, so I rate it 4/10.

And with that, this review comes to an end. If you have any point that you would like to discuss with me regarding this video then be sure to do so in the comments below! As always thanks for reading guys and I hope to see you again in my next post. Until then, Goodbye~